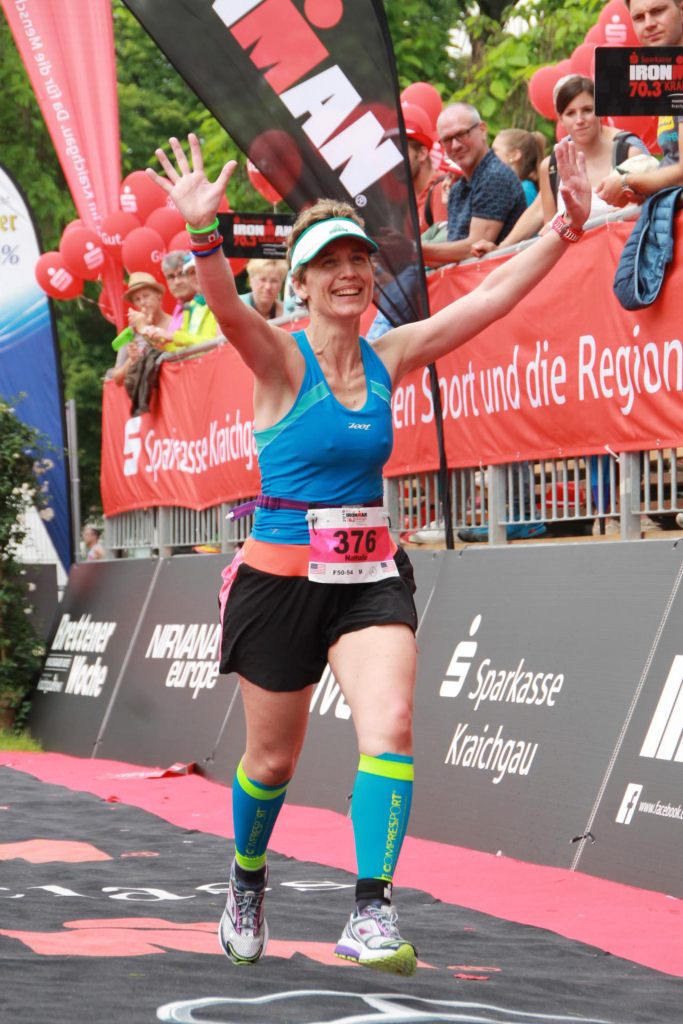 We got lucky: after all the rain that had fallen over the past 2 weeks  the morning of race day showed cloud and sun.

The first wave started at 9am, a very civilized time. But we were in the parking lot waiting for the shuttle at 6:30am. The start and finish were a few miles apart. We had checked in the bikes and the bags the day before. The shuttle did not show –rumor started that it would not come until 8am – and when friends of ours drove by around 7:30am,we jumped in their car – this was the only logistical hiccup of an otherwise very well organized race by ironman.

The swim (1.2 miles) was in a small and quiet lake, warm enough, and the women went just after the pros – I was a bit afraid that the males starting 5mn and 15mn behind us would pass us aggressively but it went well, I did not drown and swam my usual slow pace for 50mn.

I decided to change into biking shorts in the tent, and my transition was long but I felt better about having more comfortable clothing for such a long race. I had been fretting about it since the tents are not gender specific, but no one cares, so why not make oneself comfortable, so here I strip…

The bike course was a really beautiful, very hilly german country landscape. Kraighgau is the land of 1000 hills. And indeed, there is not one mile of flat terrain in the 56-mile course. But I liked it – I can get totally bored on flat terrain. At one point there is a 13% grade climb, I was a bit worried about it, in a village, just behind a bend, and it ended up being the BEST part. The street was lined with people cheering and shouting “hop-hop-hop, hop-hop-hop” and they made us fly over the climb without even realizing it, with a big smile on our faces. It took me 3h40, that is just over 15mph average, which for me is ok.

Again, changed my shorts and started on the 13-mile run, slow grade ups and downs, a bit tough on tired legs. It was 3 loops in town and through a park, and it was nice to cross path with friends, plenty of water stops and nice volunteers handing out wet sponges. I took it slow and steady, I did not want to walk, and I did not -except to take my 2 gels- and it took me 2h18 to reach the finish line.

Team EnVision's Mission is to provide a supportive, instructive, and motivational environment for women of all abilities to challenge themselves and reach their personal goals through the sport of triathlon. View more posts